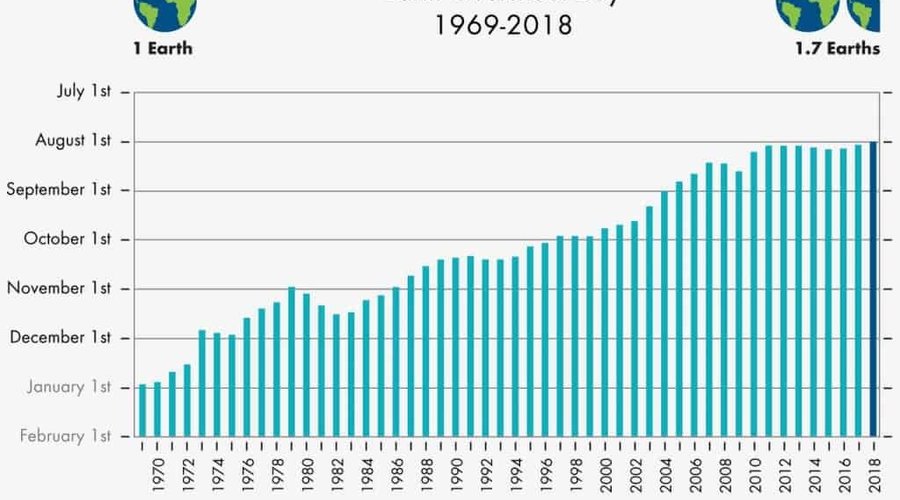 Wednesday, August 1 is Earth Overshoot Day, a day promoted by the Global Footprint Network to bring awareness to how quickly humans use the Earth’s available resources. But what does Earth Overshoot Day mean? It means that, starting from January 1st of this year, we have used up all of the total resources that Earth can regenerate in a single year–but only in seven months! These resources include forests, agricultural land, even animal populations. Our rates of energy consumption also outpace Earth’s ability to reabsorb carbon that has been released into the atmosphere as a result. Now, we are using 1.7 earth’s worth of resources per year. This year’s date is only up one day from last year (August 2), but five months earlier than the first Earth Overshoot Day in 1970 (December 29).

While it may seem impossible to reduce consumption of our available resources, there are actually many ways in which you can #MoveTheDate back. If you’re composting at home, using your brown bin, dropping off food scraps, or treating your soil with compost, you’re already making major impacts! Learn the ways in which organics diversion is helping us push back the date:

Organics are not waste, they are a resource! By composting your food scraps, you are generating a natural fertilizer that enriches soils without the same negative consequences of synthetic fertilizers. The impacts of man-made fertilizers are well-documented. Its production emits greenhouses gasses, its use depletes soils, and its run-off produces calamitous effects on nearby water sources, contaminating the drinking water of millions of Americans. Furthermore, as agricultural soils deplete, they become dependent on larger applications of fertilizer, intensifying an already vicious cycle.

Compost, on the other hand, is created by mimicking the natural processes of decomposition. Not only does this mean less off-gassing from the creation of compost than of synthetic fertilizers, but that small applications of compost build up soil’s nutrient content over time, rather than depleting it. And, so long as compost is applied in the right amounts, instead of sending vital nutrients washing into streams, lakes, and groundwater, it is well adapted to manage stormwater. While compost does not contain the same high levels of the macronutrients nitrogen, phosphorus, and potassium–often shortened to NPK–as synthetic fertilizers, it does contain many micronutrients absent from them, nutrients essential for plant health and often missing from the soils of conventionally-farmed lands.

Don’t just think compost is only applicable to farmland, though! It has many great uses in urban soils as well, improving the health of local street trees and parks, and even giving your houseplants a much needed boost. By turning your food scraps into compost, you are not only reducing greenhouse gas outputs, you are also ensuring that an abundant and easy-to-recycle material is not getting permanently lost to the landfill. How’s that for reducing our consumption of natural resources?

2. Reducing Production of Methane and other Greenhouse Gasses

When organics, such as food and yard waste, are sent to landfill, it decomposes anaerobically–in the absence of oxygen–producing methane (CH4), a greenhouse gas that is 20-30 times more effective at trapping heat than carbon dioxide (CO2). In other words, emissions of methane can have a more potent and negative impact on climate change. By composting organics, we are breaking these materials down aerobically. While this method will still produce CO2, this is a preferable outcome to the production of methane.

Composting may emit CO2, but the creation of centralized composting systems also reduces our overall greenhouse gas emissions. Sending New York City’s waste to landfills, in addition to being a multi-million dollar task, requires fossil-fueled trucks, barges, and more to haul tonnes of materials hundreds of miles away. Due to space constraints, New York City does not keep its trash locally, but ships to other states, including New Jersey, Virginia, and Pennsylvania. In contrast, food scraps collected at our food scrap drop-offs are processed under the Queensboro Bridge in Long Island City. Many, but not all, of the organics collected by DSNY are still mostly processed outside of the city but don’t travel nearly as far as our municipal solid waste. Home composters, especially, are reducing the production of CO2 and other gasses by diminishing the length of travel from kitchen to compost pile!

But, you might ask, what does the production of greenhouse gasses have to do with our resource consumption? A warming earth means an increased need for energy to power our air conditioners, heaters, and more. Not to mention, this amplifies the incidences of drought, wildfires, and other major storm events, causing us to overuse and lose further resources.

Though many people don’t realize it, soil is one of our most valuable resources. From soil springs our nourishment, materials with which we build, even the medicines that we use to heal our bodies. But we are losing soil–especially clean, arable soil–at an astonishing rate. Even more upsetting, new soil is produced at a rate of 1 cm per 200 to 400 years! Compost is not soil, nor can it act as a suitable replacement for this resource, but it can do a lot to enrich, clean, and retain the soils that we do have.

As stated earlier, compost is a natural fertilizer, supplying plants with the nutrients they need to maintain health. But it adds more than just nutrients to the ground, it also inoculates soils with an ecology of millions of tiny microbes and fungi also essential to plant function. Without these tiny bacterial and fungal colonies, plants would be unable to access the compost’s rich nutrient content. To put it another way, compost is able to revive depleted soils, helping to restore land that might otherwise be considered uncultivable.

Compost also combats the contamination found in many industrial and urban soils. Pollutants and toxins, such as heavy metals and pesticides, are commonly found in New York City’s soils. The microorganisms found in compost have been shown to digest and transform many of these materials to safer or inert byproducts. While compost is not the cure-all for every contaminant, adding this material to soil over time helps to both dilute contamination and minimize its bioavailability, making soil safer to handle. Despite these benefits, we encourage folks to get their soils tested and have a well-planned strategy for combating contamination before growing a vegetable garden!

Finally, compost fights soil erosion. It’s ability to improve plant health means it keeps roots in the soil. These roots hold on to soil in rain and wind events, limiting or completely preventing erosion. Not only that, but compost’s ability to retain moisture means that, even when soils are not being held in place by plant roots, it can reduce the impacts of soil erosion during rain and flooding, helping us to ensure that our soil stays exactly where it belongs.

These three benefits of composting and using compost barely scratch the surface of the ways in which composting can help us move back the date of Earth Overshoot Day. In fact, they don’t even come close to highlighting the overall benefits of compost to the environment! Yet, hopefully, they help you recognize the simple ways in which our waste disposal can either help–or hinder–our planet’s ability to replenish itself and support us.