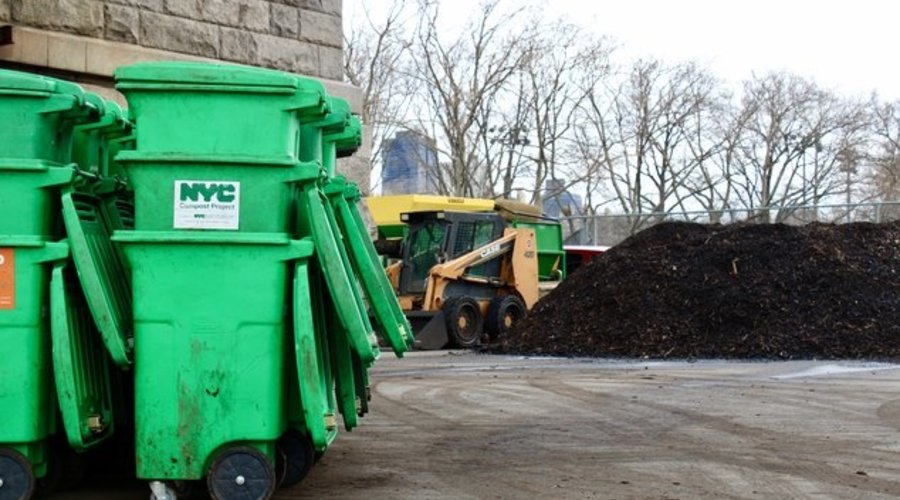 Big Reuse's compost site under the Queensboro Bridge is in the news again this week thanks to Audrey Carleton at Gothamist. Tracing some of the recent history of NYC's composting program, Carleton highlights why sites like ours and at the Lower East Side Ecology Center are currently buttressing the city's neglected composting program. After closing the food scrap collection at Red Hook Farm, the city now relies on these two processing sites for the bulk of its compost. We need long-term leases at these sites to ensure composting stays in the city and we need more sites to carry the weight of all our organic waste!

One of the last two community composting sites in New York City can be found under the Queensboro Bridge in Long Island City. Mounds of mulch piled five feet high sit next to stacks of green bins and construction materials. The piles of organic matter are divided into phases by their decomposition stage. Some are composed of banana peels, orange rinds, and egg shells, while others resemble something closer to soil. These mounds are tended to by volunteers for Big Reuse, a non-profit composting site responsible for converting over one million pounds of food scraps to nutrient-rich soil each year.

Big Reuse and the Lower East Side Ecology Center at Corlears Hook Park in Lower Manhattan represent the last remaining pillars of a once-robust citywide organics recycling program that at its height operated with a $24.5 million annual budget, included residential curbside pickup, and diverted 2% of the city’s waste from landfills.

Both sites are on track to be moved by the city’s Parks Department over the next six months, after serving as drop-off sites for roughly a decade.

Following the six-month lease extension granted by Parks in December, we continue to state that compost belongs in public parks. In order to meet the city's sustainability goals as well as public demand for accessible composting facilities, Parks should be protecting and building compost processing sites, not displacing us. Read the full article here and check out our action page for other ways to stay engaged in the struggle to #SaveOurCompost!