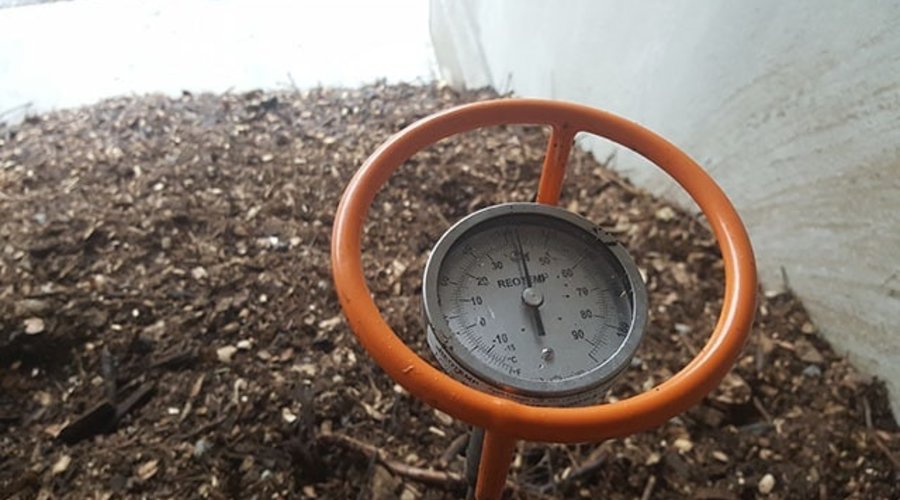 Thermophilia: Why Our Piles Are Hot! 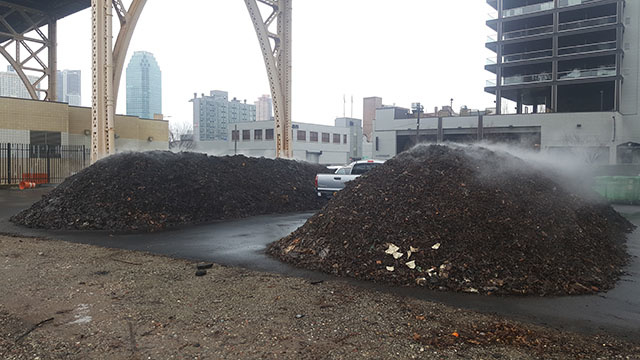 At the NYC Compost Project Hosted by Big Reuse, we use thermophilic composting—more colloquially known as hot composting—to break down all of the food scraps, leaves, and wood chips that we process. Thermophilic piles naturally heat to temperatures above 104°F and maintain these temperatures for anywhere between several days to several months depending on a number of factors including the size of the pile and frequency of turning. It seems crazy to think that just by piling up organic material and enriching them with the right balance of water and oxygen, we can achieve temperatures of 150°F or more, even in the winter months! How is that possible? you might ask. The answer, simply put, is microbes.

Microbes are an essential part of the composting process. In fact, composters like to think of their piles as a heap of foods for billions of microorganisms; a buffet of sorts. Bacteria, actinomycetes, fungi, and more feast on the remains of your food scraps, unfinished meals, and yard waste, altering their overall composition into something entirely new. Because these microorganisms change the chemistry of organic waste, they are considered chemical decomposers. If you remember anything from chemistry, you know that chemical reactions create new products from the old, including gasses and energy. In this case, one type of reaction in particular—exothermic—is responsible for the initial heating of the pile.

In brief, an exothermic reaction is a chemical reaction that releases energy by heat, giving net energy to its surroundings. This reaction is essential during the initial phase of the compost pile, when the ingredients have been mixed and the starting temperature is relatively cool. Think, for instance, of the winter, when many of the food scraps we receive are frozen and remain that way due to below freezing ambient temperatures. Without exothermic reactions initiated by microorganisms, these scraps would remain frozen until Spring!

Of course, the right conditions must exist for microbes to devour their meal. It is up to us, at the NYC Compost Project, to create those conditions. Wood chip and

fall leaves act as a carbon source from which the microbes draw their energy, while present oxygen allows them to respire, and nitrogen-rich food scraps help them to build the proteins necessary to grow and reproduce. Thus, a balanced mixture is needed in order to provide the microbes with enough oxygen and food. If you ever wonder why the food scraps you store can get stinky over time, it’s due to a lack of oxygen and carbon, and not because decomposition is an inherently stinky process. It isn’t. The conditions just aren’t appropriate for less odoriferous decomposition.

In order to consume organic materials, microorganisms must secrete enzymes to break down the compounds found in them. These enzymes catalyze reactions in which sugars, starches, proteins, and other organic compounds are oxidized. The reactions in turn produce carbon dioxide, water, energy, and compounds resistant to further decomposition. Specifically, the oxidation of organic compounds into carbon dioxide is an exothermic reaction; heat is produced.

This release of heat, of course, means the temperature of the pile will also steadily rise. By the time the pile reaches 104°F, the microorganisms producing this heat will become inactive, unable to operate at higher temperatures. At this point, the pile is officially in the thermophilic stage of decomposition and heat-loving microorganisms take over the processes of breaking down the materials. Available soluble sugars are rapidly taken up by the newly active microorganisms, causing explosive microbial growth which in turn pushes the pile’s temperature even higher.

The continuing rise is due to something as simple as crowding. Think of how hot a room becomes as people crowd into it. The more people present, the hotter the room. The same is true as microbes rapidly reproduce and are densely packed into the pile, throwing off heat as they consume sugars and further reproduce. High temperatures accelerate the breakdown of more complex compounds such as carbohydrates, fats, and cellulose. Decomposition occurring in this stage reaches 104 to 150°F.

As the chart above illustrates, temperatures will start low, rise rapidly, briefly stabilize, and then descend again. This descent occurs when the supply of compounds consumed by heat-loving microbes deplete, and their populations decrease. Yet, this does not signal the end of the composting process. Other microbes will move in to digest and convert any remaining compounds and polymers until, eventually, the pile has stabilized into organic matter that is resistant to any further decomposition.

In the end, given the right conditions, temperatures of 150°F are a part of a naturally occurring process in composting. This heat is especially useful for processing food scraps and yard waste, which can harbor pathogens and weed seeds if not properly treated. At sustained temperatures of 131°F or more, these concerns are diminished or eliminated completely. Composting can certainly happen at lower temperatures–as in mesophilic (cold) and worm composting which are the most common ways for people to compost at home. For the more than 20,000lbs of food scraps we process on a weekly basis, however, thermophilic composting is the best way to ensure a high quality product safe for use in community and school gardens.